Are you suffering from phone addiction?

I was inspired to write this post after a recent conversation with a friend, who was recounting how she’d been driving on a busy road, and found herself behind a car which was going hazardously slow . When she overtook the car, she saw the driver was texting on her phone and paying very little attention to what was in front of her, putting her own life and other people’s lives at risk.

Really dangerous behaviour but is it so uncommon, and why was this woman putting her own life and other people’s a risk for the sake of texting someone?  According to the Department of Transport ‘s statistics the biggest in-car cause of fatalities is motorists texting,  tweeting and taking calls.

Use of our phones is infiltrating every aspect of our lives and often to the detriment of our mental health and our relationships with others, with ourselves and the world itself.  In fact studies show our excessive phone usage and our increased usage of social networking sites is leading to higher depression rates and insomnia, as well as erratic driving. 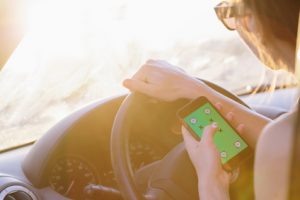 Disturbingly children and young people are at high risk of doing irreversible damage to their brain development, due to over usage of their phones and the internet.

Dr Spitzen, a Geman neuroscientist, coined the term ‘digital dementia’, a condition that is being seen widely in South Korea, where heavy usage of smartphones and game devices is commonplace. It describes a deterioration in cognitive abilities, that is more often seen in people who have suffered a head injury or psychiatric illness. Moreover, research shows that in 15% of these cases could lead to the onset of early dementia.

“Over-use of smartphones and game devices hampers the balanced development of the brain,” says Byun Gi-won, a doctor at the Balance Brain Centre in Seoul.

Yet this week the virtual reality mobile game Pokemon Go hit the headlines, the latest craze to sweep the world, which gets users to hunt for digital creatures, hidden at real locations, and in its first week has been the most downloaded App of all time on the App Store.  Worryingly there have already been reports of car accidents, due to drivers being so engrossed in the game.  The lines between reality and fantasy seem to be blurring more and more, is this progress or are we just becomingly increasingly disconnected from our surroundings? And it’s not just the younger generations who are at risk.

A friend of mine is a member of a walking meet up group, and described how some retired members had their heads down in their phones looking for pokemons, whilst they walked through beautiful countryside.

So in what other ways is our preoccupation with our phones having an adverse effect on our lives ? A recent survey of 1,700 Britons found that 62% of women and 48% of men interrupted sex to check their phone! The survey didn’t check frequency, so perhaps we can treat the results with a little scepticism, but certainly phone usage can lead to conflict in relationships and a lack of intimacy.

How many of you can honestly say you haven’t been checking your phone, when you are meant to be having some quality time with friends or your partner? How often have you seen couples or friends in restaurants both tapping away on their screens, oblivious to the company they are with?

There is a new recognised phenomena called Nomophobia, which is an overwhelming fear of being out of mobile phone contact with others. A study in the UK concluded that 53% of mobile phone users will suffer from this.

Nomophobes feel anxious when their phone is more than a few feet away, and are constantly checking their phone for texts, tweets or facebook updates. It can lead to feelings of depression, loneliness and low self esteem. Physical symptoms include shortness of breath, dizziness, trembling, sweating, accelerated heart rate, chest pain and nausea.

So what can you do, if you think you might be addicted to your smartphone?

Set some boundaries around your phone usage

Regular practice of mindfulness meditation can help reduce cravings to use phone and social media.

If you are still struggling with addiction to your smartphone despite trying the above, then you may need professional help.

Counselling and psychotherapy – Find a therapist who is experienced in working with addiction. Cognitive behavioural therapy can be helpful in changing obsessive behavioural patterns. However, longer term psychotherapy may also be a possible route to explore deep rooted issues that the sufferer may be avoiding facing.

Medication – Anti depressants may be prescribed by your GP to help ease symptoms.

Internet and Tech Addiction Anonymous – a 12 step fellowship for people dealing with excessive technology use.

Please feel free to contact me if you have any questions, or would like to book a consultation.